I replaced my light bulb tonight. That may not seem like much of an accomplishment, but it’s a victory against myself.

Let me explain: in my bathroom, there’s a commercial grade fluorescent light bulb that’s been dead since before my September move-in. My roommates had cleverly installed another small lamp on the counter to avoid having to replace the fluorescent.

“Fix the bulb” has been on my to-do list for almost three months. But the list grew around it, and I took care of other tasks first. I always felt productive, checking off items every day but also adding more. So I rationalized that I simply didn’t have time for the bulb, or that it wasn’t a priority.

The truth is, I skipped over the bulb every time because I predicted it would be difficult. Getting up on the counter, being covered in dust, trying to figure out it’s type, finding a replacement in Manhattan (it’s at least four years old). Everything felt like an ordeal.

This blog is another great example. It’s been two months since I wrote my last post, and my average before that was 15 days. “Write a post” was always on my list. And the blog even had its own sub-list: the 81 drafts I’ve jotted down to remember my ideas. Every time I went to start, I felt overwhelmed. Which post was worth writing first?

So I thought it appropriate to restart my blog with a post about lists.

I’m majorly guilty here, as a self-diagnosed chronic listmaker.  Writing a list of to-dos is a relief on my memory. I forget things constantly, so if they’re on paper, at least in theory they’re more likely to get done.

We all know how that story ends, though. The very act of putting tasks in a list makes it harder to get any of them done. Let’s explore why.

How many of us can honestly say we attack the hardest items first? I don’t think I ever have. There’s always a task or two that you can finish in five minutes and feel accomplished. “Small wins” is a decent theory – it should be a motivator, right?

In practice, not so much. These small tasks amount to only a convenient way of tricking ourselves. We feel like we got something done, so it’s easy to reward ourselves with a little unproductive relaxation. 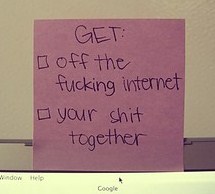 But you feel guilty about actually relaxing, so what happens instead? You read. Pick the feed of your choice. News, RSS, Twitter, Wikipedia, whatever. Somehow consuming information is the greatest mental trick of all, and leads to hours of rabbit trails on the Internet. You’re sitting in front of a computer and reading, which implies that it’s productive, you rationalize. It’s not purely fun. So in that sense, it’s doubly a waste of time.

You look at the list again. There they are, the sinister tasks you’ve been avoiding. You can still get to them tomorrow though.

The next sun arrives, and you revisit the list with fresh energy. What task should you start with, now that you’re ready to attack the hard ones?

Turns out, that’s a hard question to answer, and often we get stuck. We maximize between the tasks, trying to decide which is the most important to get done right now. We try to categorize tasks, prioritize them, and spend time planning out just how we’ll hit all the deadlines.

Planning is one of those investments that sounds logical but actually hurts. Planning ahead of our deadlines feels productive – and we can see how much extra time we have. But that makes us feel too comfortable. In project management, there’s a notion of “slack collapse” — we tend to let all the extra time pass before starting at all.

The lesson: paradoxically, we have to train ourselves not to invest so much in planning. Pick the hardest task you can think of, and just start doing it.

But there’s a good reason you were avoiding that hardest task. You probably don’t know where to start.

We have a natural aversion to two things: unknowns, and asking for help. A hard task presents both. You’ve probably played out in your mind how hard it’ll be to figure it out on your own, all the troublesome steps you’ll go through, the parts you’re unsure of, mistakes you’ll make, who you’ll have to ask, and what they’ll think of you.

Most of this is over-forecasting. We’re not sure, so we guess that everything will go wrong. It’s the same mentality that makes us never try to attack our greatest goals in life. They’re hard. We won’t see benefits for a while. And we could fail.

The solution, of course, is to take one small step toward the task. Remind yourself that getting started is the most important thing you can do, even you do something wrong. It’ll be easier to pick up the task again once you’ve made a little progress.

Whatever you do, never start listing out all the steps you need to take, or breaking the task down into pieces. You’re not a factory. That conventional wisdom gets us nowhere – it’s just making another list!

My experience with procrastination taught me to re-think my personal productivity. Get started, with some small (possibly wrong) step on the hardest task you can think of. Save the easy tasks for later. And stop listing. No matter how much it feels better to list, if you can’t remember the task, it probably isn’t worth doing.

Your will is a muscle. We exercise by forcing ourselves to attack hard problems and tasks we don’t enjoy. If you don’t exercise your will, it’ll atrophy over time, and you’ll be fake productive for the rest of your life. Now is the time. Get up and do that really hard task you’ve been carrying over from list to list for the last week.

I just finished mine. Wasn’t so bad, after all.

4 thoughts on “Checking it once”